​Ron Slavick was born and raised in Pittsburgh, PA. He began his hockey career playing in the Pittsburgh area for a local travel team as well as his high school team. In the mid 90's he attended the Hockey Night in Boston mid-west selection camp in Michigan. His play at the camp allowed him the opportunity to then move to Michigan and play midget major hockey as well as junior hockey.
After his playing days, Ron helped many goalies in his spare time, and in 2013 he started Unique Breed Goaltending. His values, passion for the game and desire to make every goalie that he works with the best they can be, has helped make Unique Breed Goaltending the fastest growing name for goalies in Michigan.
​Ron works with many teams across Michigan and Ohio and is the personal goalie coach for many goalies. The 2018-2019 season will be Ron's 6th season as the goalie coach for Cranbrook Prep School.
Ron lives in Westland, Michigan with his wife, his three sons, and of course his German Shepherd, Diesel.
JASON HILL  B.S., CSCS
Director at Unique Breed Goaltending
​Head of Off Ice Programs & On Ice Goalie Instructor
jhill@uniquebreedgoaltending.com 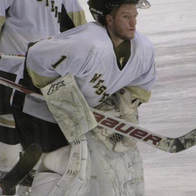 Jason Hill grew up in Clawson, MI and began his playing career with local travel teams. After travel, Jason moved on to play for Brother Rice High School for three years. It was at Brother Rice where he began to learn about weight training and speed and agility. Jason eventually attended Western Michigan University where he received his B.S. in Exercise Science and Math, while playing Division 1 ACHA hockey for the University. Since college, Jason has worked with athletes from professional football players, to five year old soccer players. When Jason isn't at the rink or the gym, you can find him playing guitar or watching a little too much Netflix.
AARON CROUSE
On Ice Instructor
acrouse@ndpma.com 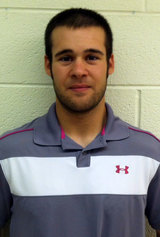 Aaron Crouse grew up in Livonia, MI playing his youth hockey within the Livonia Hockey Association.  A four-year varsity letter winner at Livonia Churchill High School, he also began working camps and serving as a goalie coach for several youth goalies in the area while in high school.
Following his undergraduate work, Aaron joined the Livonia Stevenson High School coaching staff as an assistant and goalie coach and was part of the 2013-14 team that captured the first state championship in school history. In the summer of 2015 he was hired as an assistant athletic director at Notre Dame Prep and was named as the varsity hockey head coach just a few weeks after.  The 2017-2018 season will be his 4th at Notre Dame Prep.
Aaron holds a bachelor’s degree from Bowling Green State University and a master’s degree from Eastern Michigan University, both in Sport Management, along with a USA Hockey Level 4 coaching certification.  He currently resides in Livonia, MI.
TOM NUGENT
On Ice Instructor
Goalie Coach at Detroit CC
TIMMY YOUNG
On Ice Instructor
Goalie for New Hampshire Jr Monarchs